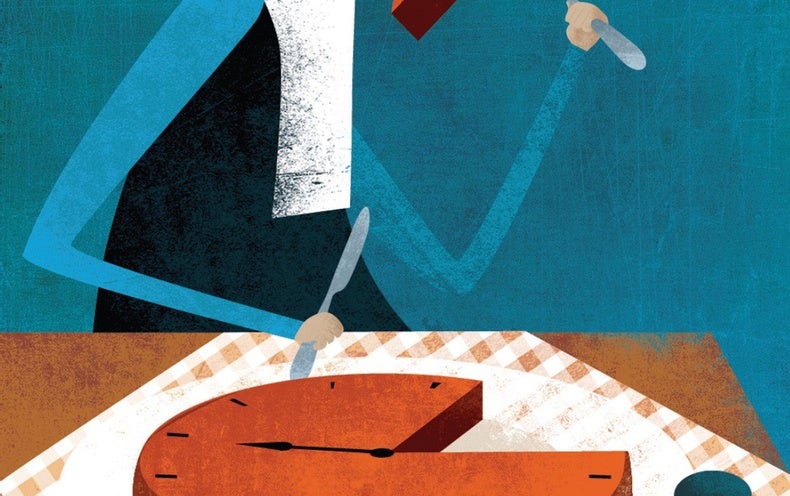 weight loss diet Credit: Fatinha Ramos
Healthy weight management comes with many perks. Among the proven benefits: a reduced risk of diabetes, less joint pain, lower chances of certain cancers and an overall fitter cardiovascular system. Some regimens, particularly the Mediterranean diet, seem especially well suited to delivering these advantages, though, as with all diets, only to the degree that people can stick with them and avoid overeating. Now research hints that another trendy diet may offer even more extensive health benefits. At least that is the claim by some who study an approach to eating—and not eating—called intermittent fasting.

Intermittent fasting (IF) has its roots in decades of studies showing that if you feed rodents only every other day, they not only remain lean but develop fewer aging-related diseases and live 30 to 40 percent longer. In a 2019 review article in the New England Journal of Medicine, gerontologist Rafael de Cabo of the National Institute on Aging and neuroscientist Mark Mattson of Johns Hopkins University summarized a wealth of findings in animals and a more limited number in people. In rodents and to some degree in monkeys, IF is a veritable fountain of youth, lowering body weight, blood pressure and cholesterol levels, improving glucose control, reducing systemic inflammation, maintaining brain health, and even boosting endurance and coordination. In humans, studies have shown that various forms of IF can be effective ways to lose weight, control blood sugar and lower blood pressure. There are hints that the more stringent forms—those with longer or stricter fasts—offer additional benefits. “But to be honest, a lot of the benefits that we see in animals are not really translating to humans,” says Krista Varady, a professor of nutrition at the University of Illinois at Chicago. “It’s not a magic diet.”

IF comes in three main flavors: alternate-day fasting, when people alternate between feast days (eating normally or a little extra) and fast days with one meager meal of about 500 calories; the 5:2 plan, which means eating normally five days a week but only one scant meal the other two days; and time-restricted eating, when daily dining is confined to a window of eight hours (or, in some versions, six or 10 hours).

Scientists attribute many of the positive effects of IF to something called metabolic switching—after 10 or 12 hours of fasting, the body depletes its supply of glycogen (a stored form of glucose) and starts burning ketones (a fuel made from fat by the liver). This switch affects growth factors, immune signals and other chemicals. “But ketones are not the whole story,” Mattson says. “These periods of fasting-eating-fasting-eating activate genes and signaling pathways that make neurons more resilient,” he says, mainly based on animal research. “It stimulates a process called autophagy: the cells go into a stress-resistance and recycling mode where they get rid of damaged proteins.” Mattson likens cycles of fasting and eating to exercise and rest: “Your muscles don’t get bigger during exercise; they get bigger during the recovery.”

There is good evidence that IF helps people shed pounds. For example, two studies, each with about 100 overweight women, compared the 5:2 regimen with a diet that cut daily calories by 25 percent; both found that the two diets led to the same amount of weight loss over three to six months. The intermittent fasters, however, wound up with better blood sugar control and a greater reduction in body fat. In addition, a 2019 study by Varady’s team with 43 overweight people showed that alternate-day fasting improved the body’s response to insulin by more than twice as much as a typical calorie-cutting diet.

IF may also have an edge in reducing blood pressure, says Courtney Peterson, assistant professor of nutrition at the University of Alabama at Birmingham. In a small but rigorous study with prediabetic men, Peterson’s laboratory showed that restricting meals to a six-hour window that ended at 3 P.M. led to better insulin sensitivity and blood pressure even without weight loss. As for other benefits, dozens of human trials are underway to test IF as a way to slow cancer growth and reduce symptoms of multiple sclerosis, stroke, Crohn’s disease and other illnesses.

In the end, the only successful diets—whatever the goal—involve permanent changes in eating habits. IF can work well over the long haul for meal skippers and people who hate to count calories. But Varady saw a high dropout rate in a yearlong study of alternate-day fasting and is skeptical of time-restriction windows that shut too early: “Nobody wants to skip dinner.”
This article was originally published with the title “Feast and Famine” in Scientific American 323, 3, 23 (September 2020)doi:10.1038/scientificamerican0920-23ABOUT THE AUTHOR(S)Claudia Wallisis an award-winning science journalist whose work has appeared in the New York Times, Time, Fortune and the New Republic. She was science editor at Time and managing editor of Scientific American Mind.Credit: Nick Higgins